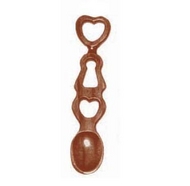 Welsh Lovespoons from Duckworths
The welsh tradition where a man would present a lovespoon to his chosen girl as a token of his affection started way back in the 17th century. If the spoon was accepted then it was taken as a betrothal of marriage much like an engagement is in modern times.
Early lovespoons tended not to be very well decorated and were generally used in the kitchen for serving "cawl" a type of broth. Over the years as the tradition grew so the carvings became evermore elaborate and are today given on many other occasions such as weddings, anniversaries, valentines day and christenings.